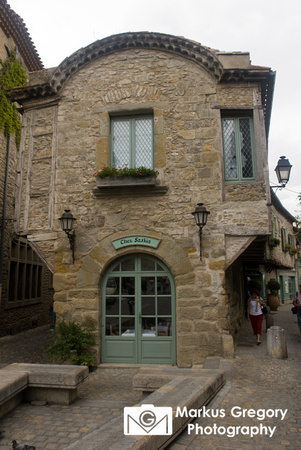 Carcassonne (Occitan: Carcassona) is a fortified French town in the Aude département, of which it is the prefecture, in the former province of Languedoc. It is separated into the fortified Cité de Carcassonne and the more expansive lower city, the ville basse. The folk etymology – involving a châtelaine named Carcas, a ruse ending a siege and the joyous ringing of bells ("Carcas sona") - though memorialized in a neo-Gothic sculpture of Mme. Carcas on a column near the Narbonne Gate, is of modern invention. The fortress, which was thoroughly restored in 1853 by the theorist and architect Eugène Viollet-le-Duc, was added to the UNESCO list of World Heritage Sites in 1997